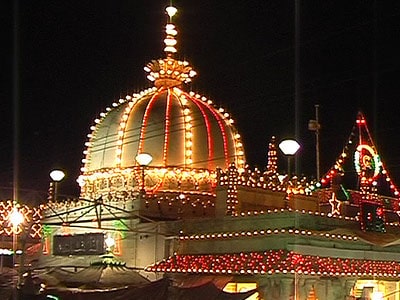 Travel Agent in Ajmer offers you Ajmer Car Rental, Ajmer city Guide and Hotels in Ajmer. Ajmer is a city rich in history, surrounded by the Aravali Hills, 130 km west of Jaipur, it was founded in the 7th century by Ajay Pal Chauhan and was the stronghold of the Chauhan Rajputs – claiming descendent from Agni (agnikula), until the 12th century. The India's first hill fort (Taragarh Fort) was built here in 7th century, ruins of which one can still see. The city was very coveted because of its strategic location on the major trade route between Delhi and sea coast of Gujarat and on the royal road leading from Delhi to the heart of Rajputana.

Places Of Attraction In Ajmer

The Dargah Sharif of Khwaja Mu'inuddin Chishti:
The Dargah Sharif of Khwaja Mu'inuddin Chishti is situated at the foot of the Taraga?h hill, and consists of several white marble buildings arranged around two courtyards, including a massive gate donated by the Nizam of Hyderabad, a mosque donated by the Mughal emperor Shah Jahan, the Akbari Mosque, and the domed tomb of the saint. The Emperor Akbar, with his queen, used to come here by foot on pilgrimage from Agra every year in observance of a vow he had made when praying for a son. The large pillars called kose(Mile) Minar , erected at intervals of two miles (3 km) the whole way between Agra and Ajmer, marking the daily halting places of the royal pilgrim, are still extant.

Adhai – din – ka – Jhonpra:
The Adhai Din ka Jhonpra,was constructed in 1153 as a notable monument which was originally a college and converted into a mosque by Qu?buddin Aybak after 1193. It is situated on the lower slope of the Taragarh hill, additions were made to the mosque between 1220 and 1229. It is also noted for its double-depth calligraphy inscriptions, in Naskh and Kuficscripts . With the exception of that part used as a mosque, called Jama' Iltutmish (pronounced Altamish locally), nearly the whole of the ancient temple has fallen into ruins, but the relics are not excelled in beauty of architecture and sculpture by any remains of Hindu art. Forty columns support the roof, but no two are alike, and exceptional creativity is shown in the execution of the ornaments.

Mayo College::
It was established in 1875 by Lord Mayo, Viceroy of India. The architecture of the school buildings evoke the grandeur of erstwhile princely Rajasthan. The main building of the school, in white marble, is a classic example of Indo-Saracenic architecture, and the design now lies in the archives of the British Museum in London.

The Anasagar Lake :
The historic man-made lake Ana Sagar lake was constructed by Maharaja Anaji (1135-1150 AD), the grandfather of Maharaja Prithviraj Chauhan. By the lake is the Daulat Bagh, a garden laid out by Emperor Jahangir. Emperor Shah Jahan later added five pavilions, known as the Baradari, between the garden and the lake.

Lake Foy sagar:
Situated in the suburb of the city, Lake Foy Sagar is a picturesque artificial lake named after the engineer Mr Foy, an Englishman, who created it under a famine relief project. It is a masterpiece when it comes to artificial lakes.

The Soni Ji Ki Nasiyan :
The Soni Ji Ki Nasiyan is an architecturally rich Digambara Jain temple. It was built in 1864-1895 by Seth Bhag Chand ji Soni, the Nagar Seth of Ajmer. The main chamber, known as the Swarna Nagari (City of Gold), has several gold-plated wooden figures, depicting characters in the Jain tradition, and created in Jaipur.

Taragarh Fort:
Taraga?h Fort, the fort of Ajmer, seat of the Chauhan rulers, is claimed to be the first hill fort of Asia, built at a time when the Aravalli mountain ranges were above the snowlines. This gives it the reputation of being one of the oldest hill forts of the world, and it is definitely the oldest among the hill forts in India. It was built by King Ajaypal Chauhan on the summit of Taraga?h Hill, overlooking Ajmer; its thick battlements run along its brow, completely enclosing the table-land.