Rajasthan’s well-known religious city, Pushkar is the most amazing and prominent city is the home of the rare Brahma Temple in the world. It is one of the very few religious temples devoted to Lord Brahma all across the globe. Named as the Jagatpita Brahma Mandir, this temple addresses the entire city and is a reason behind the rapid boost of Pushka Tourism in Rajasthan. Construction of this temple dates back to the 14th century while Indian Mythology believes the origin of this temple took place 2000 years back. Settled close to the sacred Pushkar Lake, the temple is highly a prominent landmark of the city with a large no. of tourists flock here especially during the occasion of Kartik Purnima. 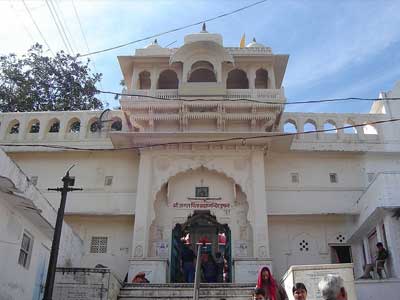 As written in the sacred scriptures of the Hindu religion, Padma Purana, Lord Brahma once came across a demon named Vajranabha, killing and torturing people. Viewing such atrocity, the Lord slew the demon with a lotus flower (his special weapons). By doing so, some petals of the flower fell at three places on the ground. All those three spots have today turned to as the three sacred lakes, which are today known as the Jyestha Pushkar, the Madhya Pushkar, and Kanishka Pushkar.
Later when the Lord made his visit to earth, he started with the preparations of a Yajna (fire Sacrifice) at the Jyestha Pushkar Lake, to perform the yajna undisturbed by the demons, Lord Brahma created a chain of hills surrounding it. Though, his wife Savitri was not available for Yajna and was disruptive of the proceedings.
On this, Lord Brahma requested Lord Indra to send him a suitable consort to complete the Yajna. When a Gujar’s daughter, named Gayatri was finally sent to take the seat next to Brahma as his wife, Savitri arrived. Feeling disturbed, she cursed Brahma that the lord would never be worshipped by anyone. Later on, she permitted his worship only in Pushkar. This entitled that there’s only Brahma Temple that is worshipped by the devotees in Pushkar Holidays.

Architecture –
Jagatpita Brahma Mandir in Pushkar is altogether a beautiful marble structure, showcasing the Southern style of architecture. It was built on a raised platform; the temple’s entrance is adorned of pillared canopies that has to be reached through marble steps. One you have made the entrance inside the temple; you will find a pillared outdoor hall (Mandapa). Near to it, there’s a sanctum sanctorum (Garbhagriha). In its center, lies the statue of Lord Brahma. Interiors of this holy shrine also contain the images of Lord of Preservation Vishnu, glided Garuda, and Dvarapalas. The façade of this structure flaunts a red colored spire on the mount of the temple. Along with this is the symbol of a Hamsa to add to the beauty of its exterior.

How to reach Pushkar?
Pushkar is located approximately 14 kilometers away from Ajmer City and is well-connected with other major tourist places by roadways or railways. When reaching Pushkar, one can opt for the following alternatives –

By Air – The nearest airport to Pushkar is located in Jaipur from where you can either choose to travel by cab, bus, or board a train to Ajmer.
By Rail – Pushkar is easily accessible from Ajmer Railway Station which is well-connected to the other major cities. Though, Ajmer is only 15km away from Pushkar, so you can reach the city without any hassle.
By Road – The well-linked city of Pushkar can easily be accessed from any tourist destination.

Best time to visit –
Well visiting Pushkar during the festival of Holi can let you experience real fun and joy. In order to experience ultimate devotion towards Lord Brahma, plan your Jaipur Pushkar Tour Package during the months of October to November. While the months of Kartik Purnima according to Hindu Calendar falls in November is the best time to visit here. At this time, a religious festival is organized at the ghats of Pushkar when pilgrims from across the globe throng the city to take bath in the sacred lake of Pushkar. Many other rites & rituals take place at the Brahma Temple during the time of the Pushkar Fair.