India is brimming with diversity which has given rise to some of the most beautiful heritage and historic sites. These places can be found all over the country and provide a glimpse into the ancient traditions and cultures of the land. Ajmer Pushkar Tour Package covers the best places which can be a much rewarding experience for foreign and domestic tourists to the country. It also offers an equally enlightening experience for travelers who may just be traveling from another city or other parts of India.
Some of the most beautiful tourist attractions are located in the north-western Indian state of Rajasthan. Ajmer and Pushkar are two such dazzling gems of tourist destinations within Rajasthan. The royal state attracts tourists from all across to come and experience their glorious heritage and unique culture. From the biggest cities in northern India and the capital city of Delhi, travelers can plan weekend road trips to Ajmer and Pushkar. If you wish to enjoy holidays in Ajmer Pushkar Trip, then enlist these places to visit in Ajmer and Pushkar for a wonderful holiday trip. 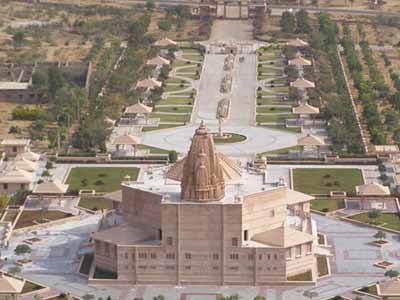 In Ajmer Jaipur Ajmer Pushkar Tour Package will take you on a sightseeing tour of Ajmer by car. One of the most prominent heritage cities included in the HRIDAY project, Ajmer gives travelers a mind-blowing experience of heritage and history. The city was earlier named the “Ajaymeru” which translated to be the invincible hill..
Ajmer Sharif Dargah - Of many heritage sites in Ajmer and Pushkar, the Ajmer Sharif Dargah stands out due to its sheer volume of tourists. The dargah holds the tomb of Sufi Saint Khwaja Moinuddin Chishti. The saint came from Persia and was much loved by the poor people. Mughal Emperor Akbar gifted the saint with two large silver pots where the saint correctly foretold the birth of his son and heir to the throne..
Ana Sagar Lake - An artificial lake is located in Ajmer, Ana Sagar Lake was constructed between 1135 and 1150. The lake was later modified by Mughal rulers. Next to the lake is one of the most beautiful gardens - Daulat Bagh. It is a popular outing spot for residents of Ajmer and a famous picnic spot with the provision of hiring water scooters and boats for reaching the middle island..
Adhai din ka Jhopra - Adhai Din ka Jhopda is the ruins of a mosque that lie further away from the Dargah Sharif. It was originally a Sanskrit college but when Mohammed of Ghori took control of the city. He then converted it to a mosque and added a seven arched wall. The wall pillars covered in Islamic calligraphy can be seen to date..
Nareli Jain Temple - Nareli Jain Temple is a sacred Tirtha of Digambar Jains in the suburban area of Ajmer. The temple is famous amongst the tourists for its beautiful architecture and intricate stone carvings which give both a traditional and contemporary look. The religious shrine is made of marble stone and is widely known for fulfilling wishes and bringing prosperity in life..
In Pushkar Amongst the biggest pilgrimage sites for the Hindu community, the city of Pushkar feels the magic of divinity and spirituality. Steeped in rich and ancient history, Pushkar is located at the edge of the great Thar Desert. It has several tourist places, many of which are so special that they are the only of their kind in the world. Some of the best places to explore by Pushkar Taxi Services are -
Pushkar Lake - With more than 50 ghats for taking a holy dip, Pushkar Lake is believed to be created by Lord Brahma. It is believed that the lake was created by Lord Brahma who dropped a lotus that fall on this holy site. The lake is visited every year by the devotees who come here to take a dip at the lake. In the months of the winter season, visitors can spot several migratory birds around Pushkar Lake.
Brahma Temple - Located right next to the holy lake, there is the only Lord Brahma Temple in the world. Built in the 14th century, it is the only of the few temples of Lord Brahma and one of the prominent religious places in Ajmer Pushkar Sightseeing Tour. The temple is made of marble and stones showcasing a rare architectural design of Brahma Temple. The religious shrine is customary for pilgrims to worship the temple followed by a holy dip at the lake.
Pushkar Fair - One of the largest livestock fairs in the world, Pushkar Fair is the most celebrated fair and festival in India. The cultural fair annually takes place during the months of Kartik (October to November). One can enjoy various culinary delights and activities like shopping handicrafts, folk dance and music performances, camel safaris, and many other things to do at Pushkar Fair. During this livestock fair cattle like camels, oxen, horses, and buffaloes, are being traded.
Varaha Temple - The most famous tourist place to visit in Pushkar Sightseeing Taxiis Varaha Temple. The religious shrine is devoted to the Varaha incarnation of Lord Vishnu. The temple is also a magnificent example of the various cultural influences of the past echoed in its architectural design.
To explore these prominent tourist attractions, you can opt for Car Rental in Ajmer from Ajmer Taxi Services to have a fully maintained car at the best affordable rates. The safe and sanitized cars will ensure you a hassle-free journey in Ajmer and Pushkar.